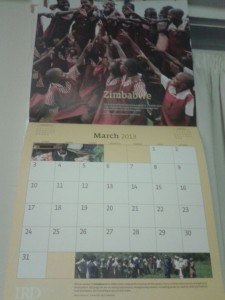 Not long ago, I attended a career fair that had many representatives from the various non-governmental organizations that exist in the DC/MD/VA area to solve the problems of the African (and developing world) masses.  I made sure to get all the swag that is typically available at such events, a tote bag, pens, and candy (I was particularly excited to find my favorite sweet, a Reese’s Peanut Butter Cup).  However, the best item that I managed to pull was a 2013 calendar issued by International Relief & Development, an Arlington based NGO that seeks “to reduce the suffering of the world’s most vulnerable groups and provide the tools and resources needed to increase their self-sufficiency.”  Washington DC readers may remember IRD from their aggressive marketing campaign on the DC metro about a year ago.

The March page of the calendar tells me that “IRD has worked in Zimbabwe since 2009 to help catalyze the transition of the country from a complex humanitarian emergency to development.”

I’ve visited Zimbabwe, a country notoriously reluctant to embrace NGOs, several times, so this mention of IRD’s work there instantly gained my attention.  Zimbabwe’s ‘complex humanitarian emergency’ can in my mind, be rather simply chalked up to incredibly poor governance, which in turn emerged as a result of a very complex history.  I find IRD’s claim to have ‘catalyzed’ this transition to be a bit far reaching.  If anything, the positive economic developments in Zimbabwe in 2009 emerged as a result of the adoption of a multi-currency system (principally the dollar) that tamed inflation and the unity government that somewhat eased perceptions of a monolithic Robert Mugabe/ZANU-PF disctatorship.  Indeed, I suspect that without those reforms, IRD (and similar organizations) would never have entered Zimbabwe in the first place.

The situation gets even more interesting, as IRD’s Zimbabwe page (click to read their numerous success stories) states that most of their work in the country consists of USAID funded efforts to support agricultural innovation.  Thus, we have the spectacle of the US government, which has placed financial and travel bans on prominent political players in Zimbabwe as a result of their efforts to reform the agriculture sector, empowering the very same smallholder farmer in Zimbabwe that Robert Mugabe has been attempting to support through a much maligned indigenization policy.  Perhaps I am still new to the ways of Washington and Western diplomacy, but I find this whole arrangement to be rather bizarre (and none of this is to say that IRD’s interventions have been anything but beneficial). Many of the IRD success stories allude to Zimbabwe’s legacy of most productive agricultural land being under the control of a small white minority (“In the past, access to credit in the agricultural sector in Zimbabwe has mainly supported agribusinesses working with large-scale farmers.”), so it seems that IRD, USAID, and Robert Mugabe have found a fairly strong element of common ground that may build on the Zimbabwe tourism minister’s (a ZANU-PF parliamentarian) recent trip to Washington DC.

1 thought on “ZANU-PF, USAID, US NGO’s, and a Common Vision for Economic Development in Zimbabwe”