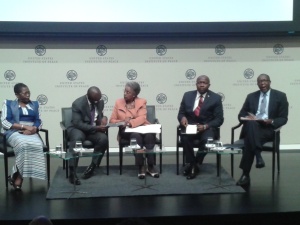 Yesterday, USIP hosted the inaugural public event of the US – Liberia partnership dialogue.  This forum was the brainchild of President Sirleaf of Liberia and the former US Secretary of State Hilary Clinton.  It seeks to diversify and expand US private sector engagement in Liberia, which the US ambassador to Liberia stated as not being nearly substantial enough at the event’s conclusion.

Although the event did not draw a full house, a star studded cast was on hand.  Liberia’s Ministers of Foreign Affairs, Agriculture, Finance, and Energy graced the podium and several other luminaries were seated in the audience.  They included the Minister of Commerce and the heads of the Liberian Business Association and Chamber of Commerce amongst several others.

The four ministers, all educated in the US, made impassioned pleas advocating for greater US private investment in Liberia.

As I took my seat, a fairly interesting documentary, ‘Liberia Rising’ was playing on a projection screen.  It depicted a somewhat fawning representation of President Sirleaf’s administration, but it seemed generally representative and well made.  Deputy Assistant Secretary for the Bureau of African Affairs (why couldn’t the Acting Secretary make it?) Cynthia Akuetteh and the CEO of the Bridges Institute, Vivian Lowery Derryck made some lengthy introductory remarks.  Akuetteh informed us that the working group of the partnership had discussed agriculture and energy today.  A second convocation of the group is expected to meet in Monrovia at the end of the year and discuss the issue of human development.  Derryck spoke of an organization she had founded toward the end of the country’s civil war, Liberia Watch, and indicated that its success shows the power of public – private partnership.

The Minister of Foreign Affairs, Augustine Ngafuan, began the remarks of the Liberians.  He indicated that the implosion of Liberia began with the military coup in 1980, rather than the civil war in 1990.  He repeatedly emphasized the importance of stability in Liberia’s neighboring countries that compose the Mano River Union, singling out the threat the civil war in the Ivory Coast posed to Liberia’s nascent recovery.  Ngafuan also spoke of his ministry’s efforts to reverse the brain drain and capital flight.

Finance Minister Amara Konneh was the most articulate and moving of the ministers.  He hammered away on the need for improvements in the energy sector (‘the center of the government’s economic policy’), as Liberia’s primary source of hydroelectric power was destroyed during the war and is yet to be rebuilt.  He made the case for Liberia’s recent success, it has one of Africa’s ten fastest growing economies, but also for the work that remains, as he lamented that this growth has not been accompanied by significant reductions in unemployment.

He spoke well of ongoing work with the Millennium Challenge Corporation to ensure that young girls complete secondary school and iterated the government’s vision to support regional vocational schools that provide technical education.  He also supported the claim that Liberia’s woes started with 1980 coup, as he referred to an economy that has been stagnate for 32 years.  Perhaps most interestingly, he called for the government to embrace dual citizenship.

The Minister of Agriculture, Florence Chenoweth followed.  She made history in 1977 when she became the first female minister of agriculture in Africa.  Chenoweth stated that the formal agricultural sector is best suited to absorb the many unemployed individuals in Liberia.  She lamented how high energy costs have hindered Liberia’s agricultural development.  Her ministry is apparently very eager to bring mechanized Cassava production to Liberia, but high energy costs have deterred potential investors to date.

The Minister lamented ‘mistakes’ that were made in introducing Liberian communities to multi-national companies.  Like Minister Konneh, she was very excited about the (potential) contributions of the Liberian diaspora to Liberia’s development.  She stressed that these contributions need not entail a physical return to Liberia.

The Minister of Lands, Mines, & Energy, Patrick Sendolo, rounded out the quartet.  His colleagues, who had stressed the need for improvement in the energy sector, had put him in a tight spot, which he took good naturedly, stating, “I’m the bad guy.”  He did see some positives resulting from a complete overhaul of Liberia’s energy sector.  The Minister believes that reconstruction of the electric grid will bring electricity to Liberia’s rural areas much more quickly than it would have otherwise; this will also have the positive impact of spurring agricultural development.

Sendolo spoke on Liberia’s effort to develop a comprehensive energy framework and stressed the enormity of the challenges faced by President Sirleaf following her election.

Collaboratively, the Ministers conveyed a passionate desire for Liberian development and for a moment, those in the audience likely forgot the enormous governance challenges in Liberia, a country that I was shocked to find has fewer roads than Niger and where the country’s Truth and Reconciliation Commission has suggested that President Sirleaf be barred from holding public office for 30 years.

1 thought on “Is it Morning in Liberia? The US – Liberian Partnership Dialogue Launches at USIP”