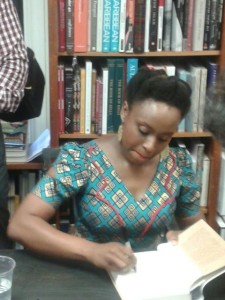 Politics & Prose continued its foray into Africanist literature (I recently reviewed an event there with the African travel writer Paul Theroux) this evening.  The Nigerian raised and American educated Chimamanda Ngozi Adichie read a selection from her new novel, Americanah and managed to give some pretty interesting responses to questions disguised as fawning statements or personal political polemics.

Adichie opened the evening by speaking of a wardrobe malfunction she experienced on her way to the bookstore that caused her to change outfits and joked about the bright red lipstick she put on for the audience, which I think gives me the leeway to say that her appearance was quite stunning.  She made several jokes about people’s interest in her hair products – I initially thought this was a dig at the Ghanaian Afropolitan writer Taiye Selasi (I also wrote about her recent P&P visit), who has received criticism for what some seem as her fashion centric, superficial tastes.  However, when I asked other audience members for their take on this, they said that I was reading too much into things.

Adichie spent the first half of the evening reading an extended passage from her book and then moved on to Q&A.  She stated that Americanah, which examines the return of young middle/upper class Nigerians who have been living in the West, represented the type of literature that she wanted to read but is unable to find.  The not particularly compelling questions also got her to reflect on:

Pan-Africanism, an outlook that she came to appreciate as a result of her time abroad.  Adichie described Nairobi as a “much calmer Lagos”, she views Jamaican culture as similar to that of (presumably coastal) Nigeria, and she told of her delight when she heard that school children in Zimbabwe were reading her first novel, Purple Hibiscus.  In regards to black America’s ties to Africa, she stated her belief that African-American history begins in Africa, not on a slave ship.

Race in America, which other writers treat with ‘ambivalence’ and ‘ambiguity’.  She also expressed her admiration for the African – American experience.

Feminism, of which she subscribes to ‘unapologetically.’  She added that middle class Nigerian women, driven by their desire to find the perfect spouse/significant other are hampering women’s empowerment in Nigeria.  Adichie believes that her generation is much more conservative on gender than that of her parents. 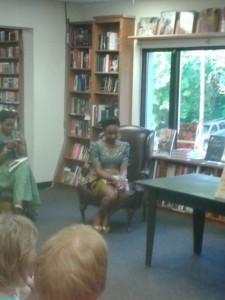 It was also great to see a diverse crowd, though men were a bit sparse.

8 thoughts on “The Pleasing Results of Chimamanda Ngozi Adichie’s Wardrobe Malfunction & Her Thoughts on Race, pan-Africanism, and Gender”