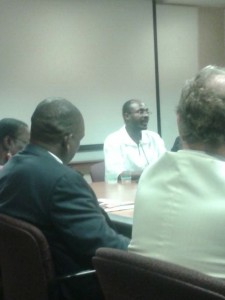 Morais in white with Angolan embassy staff to the left

I wrote Monday of a NED Fellow who lamented the lack of a presence of grassroots human rights activists at policy events in DC.  Yesterday the Africa program of CSIS hosted one such individual, Rafael Marques de Morais, an British educated Angolan journalist/human rights activist who was also a NED Fellow in 2011.  Although I became quite interested in Angola as a student in Namibia and submitted a Boren Fellowship proposal to study Angolan migrants of Portuguese origin to Namibia in the 1970s, Lusophone Africa has not figured prominently in my Africa in DC posts to date.  Consequently, despite a busy work schedule I made a point to drop in on the conversation (disclaimer: I arrived slightly late and left a bit early).

Morais is the founder of Maka Angola, a human rights organization, and a prolific writer.  His latest book, on ‘blood diamonds’ in Angola, incurred the wrath of Angola’s military, the nominal subject of yesterday’s talk, although he focused on a wide range of human rights issues, including his own persecution by the state (all while several representatives from the Angolan embassy sat just an arm length away).

Given the diversity of the topics covered, I don’t think that my usual narrative can begin to adequately cover the array of issues presented before the audience.  Accordingly, please indulge the bulleted list:

I won’t conclude with any extended analysis, just one point.  Recently, President Santos’ daughter received a lot of attention for becoming Africa’s first female billionaire.  This sparked some debate, but for the most part, it was placed neatly into the ‘Africa rising’ category.  Here’s to Morais’ voice drawing that same level of attention.