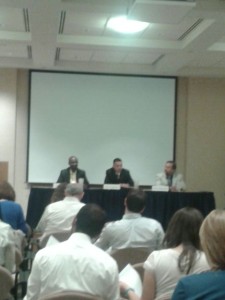 Yesterday, I attended my first talk of a NED Reagan-Fascell Fellow.  For those who have been following the blog, you will know that I am referring to Abdulrazaq Alkali, who I profiled on Monday.  Alkali is a human rights activist from Kano, Nigeria with an interest in youth development.  He spoke on “Strengthening Youth Participation in Nigeria.”

Per my usual disclaimer, I left before the Q&A.

I won’t go into too many of the specifics of the talk as many of the sentiments were similar to those I expressed in my profile piece.  He did elaborate on some of the work of YOPSIS, the NGO of which he is Executive Director.  YOSPIS has trained 3,000 civic educators and sponsored 125 internships for youth.  It was also interesting to learn that Nigeria’s Ministry of Youth and Development is less than a decade old.

While discussing the industrious nature of Nigerian youth (he had behind him a slide with young Nigerians selling second hand goods) who are not able to get ahead despite their most diligent efforts, Alkali had something of a Kelly Rowland moment (I use that example as I was at the show).  This is extremely unusual in the cold, unemotional policy and networking circles of DC and I was all the more surprised to witness it in an African male.

That said, Alkali’s emotions are entirely justified.  I recall living just north of Nigeria for two years where my neighbors worked tirelessly to till what was basically sand to produce food (by which I primarily refer to millet) that I could barely deign to consume.  To bring it home to DC, we have globe trotting development executives at non-profits raking in $200k a year who are helpless to even arrange their own travel and have very little connections to the people their organizations are nominally intervening to assist.  We have an amazingly strict visa regime that US citizens would never abide by overseas.  I have no idea what prompted Alkali’s introspection, but those in this line of work should certainly be personal about it.

To conclude with the inappropriate levity (take it as a prelude to my expected coverage of this weekend’s Miss Africa USA pageant, readers may be interested to know that similar contests are somewhat taboo in Nigeria) you may have been waiting for, I was rather distracted throughout the talk by an extremely attractive woman in an absurdly short brown skirt two rows in front of me.  She obviously knew that it was too short as her shifting in her seat only caused me to be further distracted. 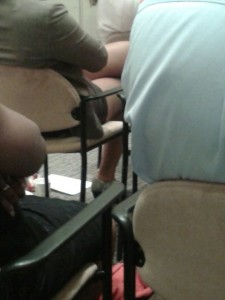 3 thoughts on “A Poignant Lunch at NED: Of Nigeria, Youth, Emotions, & (my) Lasciviousness”