I wrote yesterday about everything that went on at Miss Africa USA (an evening of beauty, talent, and grace) aside from the contest itself. To get the most important question aside first, namely which female did I find most physically attractive, that honor went to Penda Sow of Senegal.  However, in terms of the overall package, I felt like the lady representing Sierra Leone (Jeneba Wanjah) really had it going on – clever, articulate, and poised.

I wrote recently about attending my first congressional hearing.  I can now say that less than two weeks later I have made it to my first beauty pageant (although the emcee Kimberly Brown repeatedly noted that it was a ‘party not a pageant’).

Approximately 25 contestants, each representing a different African country began the night (In terms of regional representation, I believe that one contestant was based in NOVA and another lives in Maryland).  It was interesting to note that some were American born, while others were immigrants, and it appeared that a few were African and in the US studying (pharmacy and nursing appear to be popular topics among African beauty pageant contestants regardless of nationality).  After a few costume changes, the judges issued their first verdict, whittling the contestants down to 10.  Those remaining then performed a special talent, which was a variation on a musical performance, spoken word, drama, dance, song, or some combination of these.  The contestants from Ghana and Guinea, reflected the revolutionary histories of their country’s independence struggles, evoked the name of several pan-African nationalists in their spoken word pieces.

Following this stage, the contestants were halved, and what had been a geographically diverse pageant now consisted of representatives from 4 Anglophone west African countries (Liberia, Sierra Leone, Ghana, Nigeria, and Guinea).  While I am very fond of Liberian women, I felt like the contestant from Kenya, Marie Ojiambo, who sung a Miriam Makeba song in Swahili while playing the piano should have bested the young Liberian, Lischen Reeves, who only played an instrument (violin).

It was pretty clear to me that it would be a three way race between Ghana, Sierra Leone, and Nigeria.  Unfortunately, my preferred candidate (Sierra Leone) flubbed her lines.  Kathy Onwu of Nigeria via Tennessee  (who delivered a stirring spoken word piece celebrating Nigeria’s magnificence) and Alice Gyamfi of Ghana delivered their lines (on development projects in Africa and the role of women in the continent respectively) in an extremely poised manner.

Onwu (one of the more sexy shotputters I’ve ever stumbled across) took the crown with Gyamfi the first runner – up.  By this time, the audience had been watching for nearly 6 hours.  Nonetheless, the after party appeared to be rocking at Nectar Lounge just down Georgia Avenue.

The 2013 Miss Africa USA was a great night with dazzlingly stunning women – in both the physical and character aspects.  The Obama administration often talks about engaging young African leaders (including those in the diaspora as I’ve previously noted).  I doubt that any government hacks are looking at Miss Africa USA for this engagement, but perhaps they should. 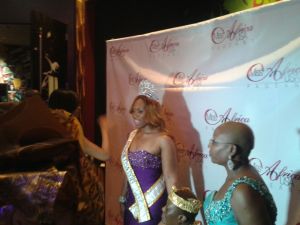 The Winner, Kathy Onwu of Nigeria