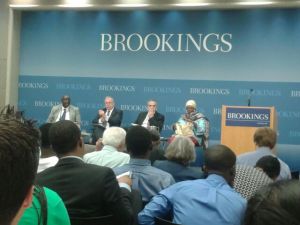 Yesterday I (and presumably the other attendees as well) suffered through a rather pedantic set of platitudes as the Ambassador of the African Union to the US, Amina Salum Ali, a high ranking World Bank staffer, Marcelo Giugale, and a media professional, Alan Spence expounded  in the most generic ways possible (for the most part) about African development, or ‘The Next 50 years of the African Union‘, as the event was billed (there was another scheduled panelist who did not show and no explanation was provided).  In the defense of the speakers, I suppose that a vague topic results in vague observations.

Ali delivered her speech in a lethargic, yet rapid manner that made it difficult to follow.  I presumed from her name and dress that she was observing Ramadan and that the fasting had her fatigued, however, she took a sip of water at the conclusion of the speech.

If you can imagine what someone in her position would articulate in the most general ways possible, that’s exactly what she addressed.  I left halfway through the first round of the audience Q&A, where in response to a question on a United States of Africa, I was pleased to hear her stress that regional economic integration should be a priority over continent wide political union.  Otherwise, her remarks appeared to basically reiterate over and over the same general themes of a need for increased integration and unity.

Giugale was the most interesting of the trio.  He highlighted the challenges of economic integration by mentioning a particular study of Congolese women who travelled to Rwanda to sell eggs.  Apparently they lose 40% of their profits to ‘tariffs’ and stand a 1 in 2 chance of being raped (per trip).  This elicited a gasp from the otherwise listless audience.

Spence heads a publishing house that produced two AU reports that the event was promoting (I suppose they can be found online, but the event did not inspire to spread the word any further).  He was the most insufferable of the bunch, noting the ‘vital’ importance of ‘communications’, ‘context’, and ‘leveraged opportunities.’  He also introduced, for seemingly no apparent reason, buzzwords such as cyber security and social media.

Even the initial round of Q&A was stilted.  A comment about African political union was followed by a question on AU support for Qaddafi during the Libya crisis, the lack of a ‘vision’ by African governments, and the challenges presented by rail tracks of varying gauges.

As I left the building, I heard Spence commending the AU (who must pay him well to publish their reports) for its engagement in the Libyan crisis via a TV mounted in the foyer.

Several interns around me also seemed to be quite bored, typing and scrolling away on their smart phones.