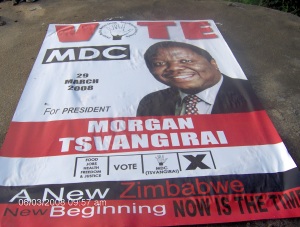 Although it has been several years since I’ve been to Zimbabwe, it is one of the African countries that I know best.  I visited the country on an annual basis for several years at the height of the country’s economic crisis and into the early years of the government of national unity.  My personal interest in African affairs really coalesced in 2008, when I visited Zimbabwe during Spring Break, just a few weeks before the historic elections that saw the opposition defeat incumbent Robert Mugabe, though not by a large enough margin to avoid a run-off.

During this visit, I spent several days in the Mudzi region (Mudzi North constituency) of Zimbabwe in the Mashonaland East Province.  This region borders Mozambique’s Tete Corridor (currently experiencing an economic boom due to the large amount of coal reserves outside that town).  For the last several years of white-ruled Rhodesia, the authorities exercised minimal to no control of this very arid and sparsely vegetated land.  When one speaks of a rural ZANU-PF heartland, this is certainly it.  It is also one of the places where food aid was thoroughly politicized, it suffered a devastating outbreak of cholera, and by 2008, the schools were effectively closed, although the kids would wear their uniforms and go there to play anyway.

In the aftermath of severe injustices, the weight of history is strong.  Despite the collapse of the state in Mudzi, the ZANU-PF parliamentary candidate would go on to claim victory in the 2008 elections, though with just under 54% of the vote.  The ZANU-PF candidate received just over 8,000 of slightly less than 15,000 total votes cast.  The MDC had a strong campaign presence in the constituency, with posters plastered all over trees.

However, it was obvious that there was a fear of publicly supporting the MDC.  There were far fewer ZANU – PF posters, but those that could be found were attached to businesses and public places, not mere trees by the roadside.  The reasons for this would become clear in the coming months.  In his book on the 2008 elections, Peter Godwin writes that some of the first electoral violence following the first round was in Mudzi.  Some sources say that it was the constituency with the most politically motivated murders in the run up to the 2nd round of the Presidential elections.

A comparison of the 2013 elections is particularly vivid, as they apparently pitted the same individuals against each other (I won’t confess to closely following the local politics), although it look as if this year, the MDC candidate switched to supporting the smaller formation.  Jimmy Jombo Charowa polled over 6.500 votes in 2008.  The results in 2013 show him with barely 500 (the candidate for the main MDC formation did slightly better, but still polled less than 2,000 votes).  The number of votes for Newten Kachepa basically doubled to just under 16,000.  Turnout increased to 57% in 2013 from 50% in 2008, but it is evident that the main bulk of the votes for ZANU – PF came at the expense of support for the MDC.

Is it possible that support for ZANU – PF in Mudzi doubled from 2008 to 2013?  I’m no political pollster, but I find that leap hard to believe.

Thanks to Sokwanele.com for the election results.