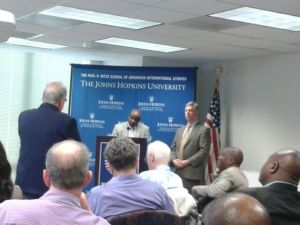 Fall is descending upon us, which means that area schools are back in session and the number of Africanist events is increasing (I’m planning to attend my first ever event at Howard, organized by the energetic Winslow Robertson, this Thursday on a Sino – Africa theme). Today, Aminu Waziri Tambuwal, the Speaker of Nigeria’s House of Representative (he represents the northern Sokoto State) and a member of the governing People’s Democratic Party (to which he defected in 2007 I believe) spoke on “Regional Security Challenges and Nigeria’s Future”.  He was accompanied by several other lawmakers who answered their fair share of questions as well (anyone know why they were in town?).I was prepared for a dull and lengthy reading of a prepared speech lacking any insight.  Instead, the audience was treated to brief and candid remarks.  Tambuwal begin his talks by situating Nigeria in the global sphere, noting the country’s important contributions to peacekeeping missions in Africa and stating that ‘Nigeria is vital to the stability of the global economy’, before turning inward – although he did continuously issue requests for more/continued American assistance in Nigeria’s battle against Islamic militants and efforts to secure its national security.

I was quite shocked to hear such a prominent member of the ruling party as Tambuwal note that some parts of Nigeria, particular those in the northeast, have standards of living lower than those at the time of independence.  In the Q&A he also critiqued the Chair of the PDP, Bamanga Tukur, another northener, noting that the party had suffered numerous setbacks since he was appointed to his position last year.

Tambuwal spoke of the low level of western education in the north as being a significant factor in its economic development woes.  He attributed a lack of electricity as hindering development throughout the country.  He stressed the need for job creation and economic diversification, noting that despite the serious challenges, he felt that ‘the future of Nigeria is bright.’  He note that significant security gains have been made in Maiduguri and Damaturu, cities were Boko Haram had previously enjoyed considerable freedom.

The vast majority of the event was devoted to Q&A.  Tambuwal fielded some questions from audience members from the right side of the political spectrum which got the audience talking about Roosevelt’s New Deal and the Tennessee Valley Authority.  Fortunately, several young Nigerians were on hand to refocus the conversation.

Tambuwal ducked questions regarding the high rate of pay received by Nigeria’s member of congress and deflected some to his colleagues.  Femi Gbaja Biamila, the minority whip, was stirred to great passion by the audience.  He refuted the assertion of a females SAIS student that gender quotas to ensure female political representation were a positive thing and became rather irate when Dr. Lubeck of SAIS and another audience member spoke of the discrepancies between Nigeria’s north and south (a scenario that he noted is also true in this country).

Tambuwal was more direct in response to a question about the recent defection of seven PDP Governors.  He noted that they come from critical states and that bringing them back to the party will be a serious test for its Chair, Tukur.

Another lawmaker, who was either from the northeast, or deeply involved in its security issues also spoke glowingly about positive gains in the war against Boko Haram, realized by the declaration of a state of emergency in several northern states.  Rather bizarrely, he specifically referenced the development of vigilante groups as a positive sign showing increased trust of the citizenry in its government.

All in all, a very interesting event, though I can say that it had any particular impact on my understanding of Nigerian politics or my view on the country (I’ve never been).  There was a modest crowd and most of those in attendance seemed to have specific ties to Nigeria. 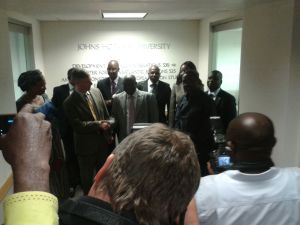