A week ago, I was thinking that I’d have two opportunities to hear from President Ernest Bai Koroma of Sierra Leone yesterday.  However, he injured his ankle playing squash and his speaking engagement as SAIS this afternoon was cancelled.  A town hall meeting in Silver Spring with a ministerial delegation went ahead as planned in the evening.  Unlike the P-Square show, this was an instance of African time working to my favor as I arrived after work just in time to catch the comments of the delegation.

Despite the President’s absence, the meeting still had a good turnout.  The theme of the town hall meeting was on an anticipated Millennium Challenge Corporation (MCC) compact and the MCC country director, Chris Dunn, was one of the few individuals in the audience who did not appear to be a member of the country’s diaspora.  Throughout the evening, I found myself comparing the event to the public session of the US – Liberia partnership dialogue that I attended at USIP in May.  That event, which also lost a President’s participation at the last minute, had much weaker, but significantly more diverse attendance.  It is amazing what an established venue can do to make non-Africans feel more comfortable.

The President’s Chief of Staff, Richard Conteh, who served as moderator punted things off to the Ambassador of Sierra Leone to the United States, Bockari Stevens, who opened with some brief remarks.  He noted that discussing the compact, which Sierra Leone just qualified for in 2012, with the diaspora was a prerequisite before the contract could go into effect.  Several speakers that followed articulated that this was not the case, but I cannot imagine why the embassy would focus on the MCC unless there was external pressure to do so.

The Deputy Minister of Finance, Mabinty Daramy, spoke of meeting Obama the US President’s high praise for his counterpart in Sierra Leone and introduced the rather large delegation, including members of the Embassy, although it was apparent that she could not remember the name of the Deputy Chief of Mission.

She was also the first to mention the acronyms for administrative staff known as SPA and SEA (which I found out through later discussion are a Special Personal Assistant and Special Executive Assistant respectively).

Richard Conteh at center, Mabinty Daramy to his right.  The Minister of Youth Affairs at far right.

Two members of Sierra Leone’s MCC team followed. Amadu Massaly told the crowd that they ‘should feel proud that [their] tax dollars are going to make an impact in the country of [their] birth.’  Mammoud Idriss gave a rather lengthy PowerPoint presentation explaining in some detail what a MCC compact is and how the process works.

He noted that the government was hopeful that the compact would focus on at least two of the following areas:

1. Electricity (which meshes nicely with current US priorities)

The SPA to the Minister of Information,  Alpha Kanu, gave a very impassioned introduction to his boss, a British educated engineer who is quite close to President Koroma.  Kanu, they keynote speaker in Koroma’s absence, spoke for quite awhile, touching on everything from the Magna Carta (King John not Jay Z), Aladdin, and the priorities that President Koroma articulated on his first day in office – energy, infrastructure, and health.

The event closed with Q&A from the audience, who did not hide their displeasure at being directed to stick to questions on the MCC (they did not).  One complained of the session being ‘micromanaged’ by Conteh.  I was particularly intrigued to note the displeasure of some of the crowd with the speakers and to observe the highly partisan tone of the event.  At times, I felt as if I was at a campaign rally for the ruling All People’s Congress.  Most of the delegation heaped praise upon the President and the printed program honored him as a ‘darling of democracy’ who holds ‘an unblemished and enviable public record.’

The delegation, most of whom had spent significant time in the diaspora themselves were impressive.  However, I found the Ambassador’s admission that the President wanted to participate remotely but the technology would not allow it to be a damning indictment of the state of the country.

The World Bank was able to connect the President on its premises yesterday (Koroma’s SEA has a triumphant article about it).  The fact that his Office, in 2013, seemingly has to rely on the services of the World Bank to facilitate participation in a virtual event is beyond a crying shame. 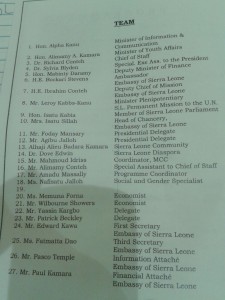 1 thought on “‘We Have Not Really Tapped Into The Potential That You Have’: Town Hall Meeting with the Sierra Leone Diaspora”