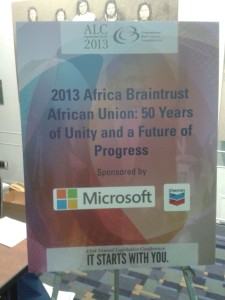 I skipped work today to attend the 2013 Africa Braintrust (this was my second time in three years of DC residence). The Braintrust takes place each year during the Annual Legislative Conference of the Congressional Black Caucus and convenes a large crowd.

I entered at the end of Panel I, ‘Looking Back at 50 Years of African Independence’, but I’ll focus my summary here on the individuals cited in the subject of this post. I did however enjoy the comments of Nii Akuetteh on the first panel.  He channeled the crowd’s strong admiration for Kwame Nkrumah by noting that he was ‘here for one reason only…Nkrumah’s education policies.’  Joseph Huggins, a former US Ambassador to Botswana also made some hard hitting comments on China, noting that ‘Chinese workers don’t go home’ and that China sends its convicts to work on labor intensive projects in Africa.

That panel was followed by the keynote address from Nkosazana Dlamini Zuma (with a trailer of a short film on the African Union’s 50th anniversary celebrations in between), the ex-wife of South Africa’s President (why would she keep his name??), former Foreign Minister of South Africa, and current Chair of the African Union (AU).

Her speech was rather plodding, but no one can accuse her of engaging in vague political platitudes.  She began by stating some statistics which suggest that Africa’s economic position in the world today is more marginal that it was in 1700, but  noted that despite this, she believes that there are many strong reasons to be an Afro-optimist – the continent’s mineral resources, favorable demographics, etc; in her own words, ‘a continent that is prosperous, integrated, and at peace with itself.’

She then outlined eight goals that the AU should achieve to give life to this sense of optimism.  They were fairly generic, but I was pleased to note that agriculture was one of them.  She concluded by echoing Kingsley Moghalu, arguing that Africa needs to control its own narrative.

She remained on stage as she was joined President Blaise Compaore of Burkina Faso (readers will know my feelings on him) and President Hassan Sheikh Mohamoud of Somalia.

My negative feelings of Compaore were reinforced as he delivered some very abstract comments about his role as a peacemaker in west Africa.  He spoke of his success in alleviating political crises in Togo (really?) and Guinea, a Tuareg rebellion in Niger (he shares that laurel with Qaddafi I imagine), and the ‘very complex’ armed conflicts in Ivory Coast and Mali.  In my book, both of the latter were only resolved with UN/French armed intervention.  I don’t see how Compaore can take credit.

I lost all respect for the head of the Smithsonian’s Museum of African Art, Johnetta Cole, the moderator, when she thanked Compaore for his contributions to African peace and security following his remarks.

I really enjoyed hearing Mohamoud’s remarks about his administration’s efforts to contribute to the sense of Afro-optimism described by Dlamini Zuma.  He noted his administration’s efforts to rebuild schools, medical centers, and repatriate 1 million refugees.  He closed by noting his 4 priorities, which included improving security and the judiciary (I did not catch the last two).

I greatly enjoyed the event and thank the Office of Congresswoman Karen Bass for putting it on, but I found the prominence of her name all over the Braintrust (the program, powerpoint slides, etc) to be a bit disconcerting.

From L to R – Compaore, Mohamoud, and Zuma