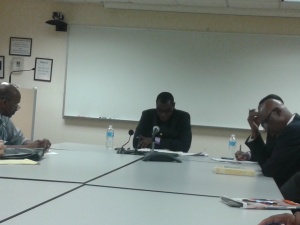 I heard Albert Moleka, the Chief of Staff to Etienne Tshisekedi, the Congo’s main opposition leader, speak in theory yesterday on “D.R. Congo: How the Kampala Talks and the Concentrations Nationales Undermine the Rule of Law and Fuel Instability” at SAIS.  Moleka is a SAIS graduate (’82) and expressed his esteem for William Zartman, a former head of SAIS’ African Studies Program who ‘impacted [his] intellect forever.’  He returned to the DRC where he briefly dabbled in business before turning to politics, where amongst other roles, he served as a prison chaplain (which may explain his biblical quote in the title of this post).  He has been a member of the Congo’s main opposition party, the Union for Democracy and Social Progress (UDSP) since 1987.

The discussion was moderated by Mvemba Dizolele, a SAIS professorial lecturer who noted that ‘everybody knows the M23 (supposed Rwanda backed militia group operating in the east of the DRC) is a front.’

I am not a knowledgeable observer of Congolese politics, but for those who are, Moleka’s candid and wide-ranging remarks, likely caused great excitement.  His opening comments, like Kristie Inman’s, were refreshingly concise.  He primarily quoted the observations of several American observers of the Congo, displaying his continued engagement in academia.  I did not know any of the names, but one was Tony Gambino and another was Stephen Weissman – who was actually in attendance.

These quotes, which I interpreted Moleka as being in agreement with, spoke harshly of President Kabila.  They referenced the President’s ‘contested mandate’, ‘electoral chaos’ following the last Presidential election, and political ‘intimidation’ and ‘corruption’. He also quoted scholars who observed that in addition to the DRC, Rwanda, Uganda, and Burundi were all countries that would benefit from a genuine democratic transition.  Moleka himself went on to call President Museveni of Uganda ‘the Bismarck of Central Africa.’  He did say however, that ‘the problem of the Congo is not just Rwanda or Paul Kagame.’

In the Q&A Moleka expressed his visceral displeasure with the former (I think he has since been replaced) head of the UN Mission in the Congo, Roger Meece, a onetime US Ambassador to the Congo.  He shared in detail an anecdote concerning a meeting with Meece and representatives from Gabon and Russia in which he was informed that the results of the 2011 election would be released several days later than previously established.  The UDSP acquiesced to this, only to hear the results announced the following day (which Moleka was warned of in advance by a phone call from a representative of a Western embassy in the DRC).

Asked about the various western mediators floating around the Congo and the Great Lakes Region, Moleka expressed skepticism.  He noted that they often do not meet with the opposition and speak to members of civil society beholden to those in power, observing that as a result ‘they still believe that Mr. Kabila has the necessary legitimacy.’  He added that the mediators are ‘wasting time’ if they don’t investigate and consult more deeply.

On the military action that overthrew President Mobutu in 1997 and instilled Kabila’s father in power, Moleka noted that the 1996 rebellion came ‘out of nowhere’ and was ‘supported by western powers.’  Perhaps most fully capturing the complexity of the Congo, Moleka noted that while a peaceful struggle is desired for a better Congo, ‘in order to be heard…you have to resort to armed struggle.’  He added that many Kinshasa-based politicians have their own militias and that one should not ‘be surprised in the coming months if militias erupt in the west (of the DRC).’

He also spoke of Tshisekedi’s political abilities (and relevance) and the geographical balance of support for the UDSP.  Regarding the future of Congo’s Executive, he noted that President Kabila, currently serving his last term permitted by the Constitution, will probably ‘do what he can…to find a third term

I left with about 15 minutes remaining for the discussion, having been greatly enriched and feeling greatly appreciative of the straightforward remarks.  Those in attendance looked to be primarily SAIS students and Congolese men.