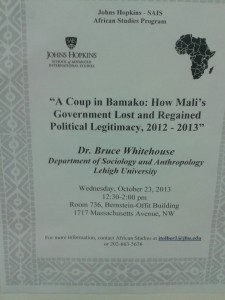 Today, I was able to hear the Lehigh anthropologist Bruce Whitehouse speak for the second time since I started blogging.  Dr. Lewis of SAIS’ Africa Studies Program noted in his introduction that he was ‘delighted to welcome’ Dr. Whitehouse.  I second that comment, as I greatly appreciate the nuances, specific info, and multiple perspectives that Dr. Whitehouse brings forward in his speeches as well as on his blog (which is much more sophisticated than mine but rather infrequently updated these days).

Dr. Whitehouse began by noting that he relished the opportunity to speak at SAIS, so much so, that he did not hesitate to accept the invitation for a 90 minute speaking engagement that entails an 8 hour round trip drive.  He also noted that he had interned/worked in DC in the 90s, alongside Todd Moss (at CSIS I believe).  In addition to Todd Moss of CGD, a few other big names of the Africa in DC scene were in attendance, including Richard Downie of CSIS, and Nii Akuetteh.

Whitehouse spoke on ‘A Coup in Bamako: How Mali’s Government Lost and Regained Political Legitimacy, 2012-13’.  In summary, Whitehouse believes that despite ‘widespread disorganization’, ‘poor planning’ and disenfranchisement of voters, the election was a ‘success’.  He noted that turnout in the first round was about 50%, whereas it had failed to reach 40% during any previous election.

He began his remarks by tracing the ascendancy of Mali since 1992 as a ‘darling of the international donor community’.  Whitehouse looks rather youthful, but between Peace Corps service, doctoral work, and a Fulbright in Mali, he has an incredible wealth of experience in the country.  His primary interests however, are more cultural than political.  He is the author of what sounds like a fascinating book on Malian immigrants to Congo Brazzaville.

However, as he noted, ‘events were going to overtake [his] little book’, so I suspect he spends quite a bit of time in the political arena.  He informed the audience about a seminal moment on live TV when Amadou Toumani Touré was chastised by the families of those serving in the military, which was effectively seen as the death knell of his presidency, despite polls only months earlier that gave him a 86% approval rating.

He also spent some time discussing Amadou Sanogo, who led the coup against Toure and was briefly Mali’s head of state.  He mentioned his training by the US – not something unusual in itself given our increasing national interests in the Sahel, but still notable for its frequency.  He travelled to the US at least 5 times for training and also received US military training in Morocco (as well as in Mali).  While not highly educated, he was teaching English for the military at the time of the coup.  He noted Sanogo’s dress and use of accessories to portray himself as a heroic figure during his transitional administration.

Sanogo seems to have been largely ignored in recent months.  Whitehouse related that he was considered a black sheep of the family, only rising to the rank of captain despite over two decades of military service.  He has even recently been kicked out of a command post that he built following the coup.  Nonetheless, Whitehouse noted that he doesn’t ‘think we’ve seen the last of’ Sanogo.

He didn’t speak much on the Tuareg question in Mali, although it came up briefly in the Q&A (which I left halfway through).  He noted that establishing an independent Tuareg nation in Mali is an extremely questionable prospect on demographics alone.  In what was briefly proclaimed as the independent Tuareg nation of Azawad, Whitehouse noted that best estimates put that territory at a population comprised of roughly 30% Tuareg.

If this event had been held a year ago, there would have been massive overflow attendance (although it was still quite large for the room).  Most observers don’t have the deep cultural attachments to countries that Whitehouse has displayed with Mali.  I wish that more people did – that would truly signal a shift for better US Africa policy. 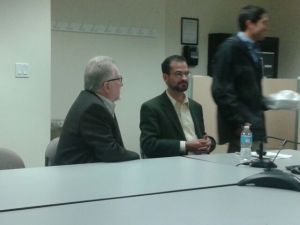 Whitehouse, sitting at right, with a colleague of a long gone era, Todd Moss, entering behind him