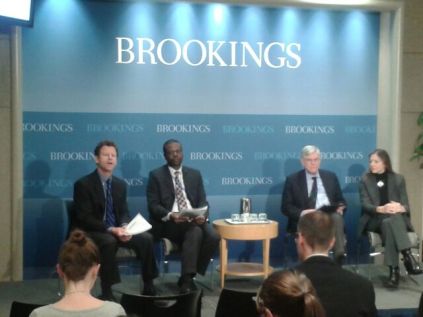 Yesterday I popped in for about half of a session at the Brookings Institution on ‘The State of Conflict and Prospects for Peace in Africa.’  Panelists included Vanda Felbab-Brown and Amadou Sy of the Brookings Institution and Amb. John Campbell of the Council on Foreign Relations.  The panelists focused on sources of instability in Somalia, the Central African Republic, and Nigeria.  The moderator was also slated to speak briefly on the Democratic Republic of the Congo but I left in advance of his remarks.  Mali was not on the agenda, showing how much things can change in a year.

Felbab-Brown, a MIT trained political scientist, with significant experience in Latin America and Afghanistan, got things started in her discussion on Somalia.

She spoke very briefly on the security situation in Somalia, noting that the country (like Mali) has been portrayed as a success, often in ways that are not justified.  She stated that while al-Shabab has been weakened, the primary impact of military offenses against it have been to disperse it and drive it underground.  She added that there have been very few security gains in the past two years.

She painted a picture of a country riddled by corruption, violent competition among clans, and with serious challenges against its territorial integrity from administrations in Somaliland, Puntland, and Juba.

Amadou Sy, an Economist at Brookings, spoke on the situation at the Central African Republic (after almost half a year, my pleas have been answered).  Sy noted that the situation in the CAR has not resonated in the US, with Lord’s Resistance Army watchers being the main US constituency for CAR awareness.

Sy expressed majors concerns about CAR’s long term prospects, noting that the country will need international support for a ‘long,long time.’  He spoke of fighting between and among various armed factions, rising religious tensions, and increasing food insecurity.

John Campbell, an Ambassador to Nigeria under George W. Bush,  spoke on the situation in that country.  His remarks were by far the most penetrating and opinionated.  He observed that there is a ‘widespread view that the current government…cannot address the fundamental problems of the Nigerian state.’  He also put some statistics to the explosive growth of Christianity in the country.  I have no idea what the source of this data is, but Campbell noted that from a population in 1900 that was 2% Christian and 27% Muslim, Nigeria is now almost evenly divided between Christians and Muslims (although I believe there is a large populaton of ‘animists’ that Campbell accounted for).  Campbell also spoke of ‘ethnic cleansing’ in Nigeria’s Plateau State.

He mentioned specific current events, such as critical communications from ex-President Obasanjo and the head of the Reserve Bank, Lamido Sanusi, revealing the lack of capability of the current administraton.  Campbell painted a picture of Nigerian President Goodluck Jonathan as beholden to various constituencies in the Niger Delta, a situation that only exacerbates tensions with the north of the country as elections aproach.  As he so eloquently put it – Nigeria is ‘between a Boko Haram rock in the North and a MEND [Movement for the Emancipation of the Niger Delta] hard place in the South.’

Aside from Campbell, Sy and Felbab-Brown delivered pretty prosaic remarks that I could just as easily have had the honor of giving myself.  I wish I had been able to stay for Q&A to see if they seized that opportunity to go more in depth.

2 thoughts on “Brookings on Conflicts in Africa: Nigeria, Somalia, and Central African Republic”