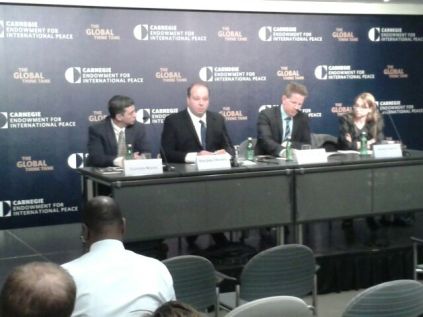 From L to R: Watts, Hansen, the Moderator, and Bruton

Continuing my focus on African security issues this week, I ducked in for the better half of a Carnegie Endowment for International Peace event yesterday on ‘The al-Shabab Threat After Westgate.’  The depth of the analysis was light-years beyond what I heard at the Brookings Institution on Monday (many names that resonated with me only vaguely, if at all, were thrown about).  Two of the speakers indicated that al-Shabab was a spent force, the lone dissenter (and the only non-American on the panel) opined that while al-Shabab is in decline, ‘they still have a potential to be a major threat.’

1. A large amount of internal discord.

2. Reduced revenue base as a result of military setbacks at the hands of African Union and Kenyan forces.

3. Increased regional outreach.  Hansen cited an al-Shabab presence not only in Kenya, but in Tanzania and Ethiopia as well.  If I caught him correctly, he also noted the presence of a not insignificant number of Nigerians in Mogadishu in areas that had been controlled by al-Shabab.

He also praised al-Shabab for its ‘highly professional’ propaganda, much of which he noted has merely been to highlight facts.  He cited the United Nations Development Program as having been instrumental in al-Shabab’s propaganda (unclear as to precisely why).

Bronwyn E. Bruton of the Atlantic Council followed.  Bruton has worked for the National Endowment for Democracy and USAID.  In addition to her career as an administrator, she has conducted research as a fellow of the Council on Foreign Relations.

Her main argument was the al-Shabab effectively no longer exists.  It had previously amalgamated a clan-based faction of domestic political figures in an uneasy alliance with globally oriented jihadists (led by Ahmed Abdi Godane) – who she termed ‘a pack of transnational parasites.’ Hansen refuted this interpretation, arguing that people Bruton identified as belonging to the clan-based group also have an international agenda.

Bruton seemed very focused on highlighting the extent to which al-Shabab affiliates were disinterested in the well-being of Somalia, noting that the Westgate attack will likely lead to discrimination against ethnic Somalis in Kenya and reduce the ability to send remittances to Somalia from that country.

Bruton’s dismissal of al-Shabab did not extend to optimism about Somalia.  She noted that the country has ‘the worst government in the world’ and that even if al-Shabab completely evaporated from the scene, conflict in the country would continue.

Clint Watts, a former FBI agent who has followed events in Somalia for eight years and now blogs on national security issues at SelectedWisdom, concluded remarks from the trio (his comments provide the title of this post).

Watts appeared to be very interested in the role of American jihadists in Somalia, making frequent references to his twitter discussions with the Alabama born Omar Hammami as well as the prominent role of an American known as Jihadi Moustapha.

Watts praised al-Shabab for effectively pursuing different strategies (or being good little Darwinists), but made it clear that he believes the group is on the decline and that attempts to internationalize reflect a position of weakness rather than strength (an argument that for reasons that baffle me, many find to be inherently convincing).

I left shortly into the Q&A, much more knowledgeable about al-Shabab, even though much of the highly technical conversation was difficult to follow.