I’ve heard prominent authors such as Paul Theroux, Taiye Selasi, and Chimamanda Ngozi Adichie speak at Politics and Prose since launching this blog.  The independent bookseller continues to impress me with the number of African or Afrocentric writers it hosts.  This Friday, Ishmael Beah, a former Sierra Leonean child soldier, who shot to prominence with his autobiography Long Way Gone, spoke at P&P to promote his just released novel, Radiance of Tomorrow.

Beah was resettled in the US via an intervention from UNICEF and went on to gain a degree in political science from Oberlin.  I was surprised to observe how many individuals with connections to the College were in attendance.

In his first novel, Beah explores life in Sierra Leone after the conflict in that country has ended.  Beah launched his remarks by noting that the Western world displays a strong interest in countries in the midst of devastating conflict.  However, as soon as the security situation improves, Beah notes that ‘we drop out of the news immediately.’  I cannot stress how much I agree with that assessment.  Since moving to DC, I have observed this in numerous African contexts, most notably in the Ivory Coast and Mali.

Beah then spent quite a bit of time detailing the richness of his mother tongue, Mende, the importance of oral traditions in his culture, and his efforts to capture the complexity of Mende when writing in English.  He lamented the urban youth of Sierra Leone (he enthusiastically proclaimed ‘I’m a village boy’), whose knowledge of local languages is being weakened by the increasing prominence of Krio as a lingua franca.  He added that the process of writing the novel allowed him to rediscover the ‘intricacies, beauties, and wisdom’ of Mende culture.  He stated that he sees as Sierra Leone as the most religiously tolerant country in the world.

Beah read two passages from Radiance of Tomorrow and engaged in a brief Q and A.  He spoke on his experiences as a child soldier, noting that as a student at Oberlin he continued to experience flashbacks and nightmares as a result of his experience.  Paradoxically however, he noted that his service allowed him to ‘build certain characteristics’ to mask his real emotions.

Beah made numerous criticism of Western thought – the yearning for a single truth, the irrational requests of US schools for his report card when he was seeking admission to high school, and the implausible tendency to equate happiness as the absence of challenge.

He also spoke passionately on the West’s coverage of Africa and its tendency to ‘sensationalize’ and ‘generalize’.  He referenced Kony 2012 and noted that ‘people feel like they can generalize anything that has to do with Africa…but guess what? That is not going to happen anymore.’  He also spoke ill of people who make brief visits to Sierra Leone, stay in a fancy business hotel, and subsequently pass themselves off as experts on the country.

While I wholeheartedly agree with these assessments, I wonder how cognizant Beah is that someone, such as a former comrade in arms, could just as easily critique an individual in the diaspora, living a relative life of comfort, appealing to the West’s romantic knowledge of African traditions (such as oral storytelling) and making a living off of their previous misfortunes.

While Beah’s criticisms of the West’s stereotypes of Africa are entirely reasonable, I was struck by the extent to which he continues to embrace Sierra Leone as his home (I think it is safe to presume that he is now a US citizen).  Beah is 33 years old and left Sierra Leone in 1997.  He uses ‘we’ when referring to Sierra Leone, describes its inhabitants as ‘my people’, and notes that he feels that he does not know the US well enough to comfortably write about it.  He describes himself as being ‘a Sierra Leonean with some American tendencies.’

In many respects, Beah’s remarks resembled those that I heard Adichie make, although I found the conscious decision to reject anything that smacks of the ‘Afropolitan’ label to be quite intriguing.  I’m very interested to know what he will be doing and writing about in five years. 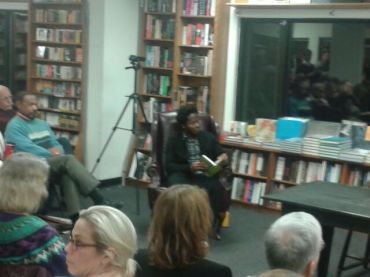 3 thoughts on “Writing for the Ones Who Suffer History, Not Those Who Make It: An Aggressively Afrocentric Ishmael Beah at Politics and Prose”