The last event I covered for Africa in DC, on Afrofuturism, was bizarrely intriguing.  The event I discuss here, Mali: The Peaceful Resolution of Conflict, was just short of a train wreck.  The discussion was hosted by the Capitol Archaeological Institute and I commend them for keeping a focus on Mali now that the conflict has receded.  However, the event’s speaker, the founder of the Malian Manuscript Foundation, Michael Covitt, exhibited the worst traits of an Ugly American during his discussion moderated by recent Yale PhD and former GWU student Douglas Park.

I wasn’t aware a reception was on the agenda so I stood around awkwardly for about 10 minutes (it would have been even longer if I had not originally gone to the wrong room) before being ushered in to an auditorium to see a short trailer of a film (‘333’) on Timbuktu’s ancient manuscripts produced by Covitt.  The trailer was quite professional, included clips of Henry Louis Gates and Mali’s Ambassador to the US, and seemed like it may have been representative of what might be a good film.

However, Covitt quickly identified Mali as the lynchpin of world peace and the ensuing discussion (which lasted less than 45 minutes) deteriorated from there.  Park seemed extremely knowledgeable and dropped a few very interesting gems – for instance, it is likely that no university in the world educated as many students at a time as three institutions in Timbuktu until the US passed the GI Bill following World War II.  I also learned that a former Malian President is a trained archaeologist.  He did a fantastic job at trying to focus the discussion, although this prompted Covitt to observe at one point – ‘that’s the longest question I’ve ever heard in my life.’  In response to another question from Park, he informed the audience that they would have to spend money to watch his movie to get the answer (a strange position for someone working for world peace).

Covitt made several sweeping statements which prompted me to reflect on my post about Justin Sacco:

In regards to African politics, he opined that: ‘Mali was the most stable democracy in all of Africa.’

In regards to the genesis of Mali’s recent conflict, he referred to Tuareg grievances: ‘the average Tuareg makes less than two dollars a day, so a bunch of them as kids went to Qaddafi’s Libya to be mercenaries.’

On security matters – ‘a coup is not a big thing in that part of the world.  It is not like the President is really being protected.’

On deposed President Amadou Toumani Touré: ‘He was a good guy.  He was probably a little corrupt.’

He must have a bit of an educator in him as well, as apropos of something I cannot recall (possibly nothing), the audience was informed that ‘a fable is a fictitious short story about animals with a moral purpose.’  He also launched into an extended anecdote on Hank Greenberg and the insurance company AIG in response to comments by a Smithsonian staffer who had recently returned from Bamako.

I was pleased to hear Covitt laud South Africa for their support of manuscripts in Timbuktu and it was interesting to note that there are copies of alot of the original manuscripts that have been destroyed as a result of the recent conflict.  Unfortunately, he concluded his remarks with a comment that embodies the quintessential characteristics of an Ugly American.  He noted that the three most valuable things to come out of Mali are ‘salt, gold, and the wisdom of the manuscripts.’ 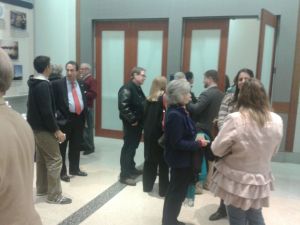 1 thought on “‘I Knew the Answer for World Peace was in Mali’: The Founder of the Malian Manuscript Foundation at GWU”