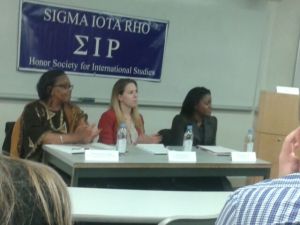 Although I’m not yet 30, I was definitely one of the oldest in the audience, which looked very bookish.  I sat next to another one of the oldest individuals in the audience, who had come to the event after work in Arlington.  He noted that he wanted to study development at the graduate level at GW.  When I asked what kind, he stated ‘international.’

I left after about 2/3 of the event.  I’d heard Captain-Hidalgo speak at GWU previously, and I didn’t find her comments to be anymore insightful this time around.  That said, the broad nature of the topic didn’t allow for much in the way of specifics.  I particularly enjoyed Yelibi’s comments and her observation that the cycles of development projects often ensure that interventions are often doomed to fail.

I found the most interesting comments to come in response to a question about what accounts for Africa’s enhanced world standing:

The event would likely not have appealed much to devoted Africa watchers, but in terms of getting GWU students to think about a region that is probably not at the forefront of their studies, it was pretty solid.  I’ll also make the bold prediction that Christiane Yelibi will become a prominent name. 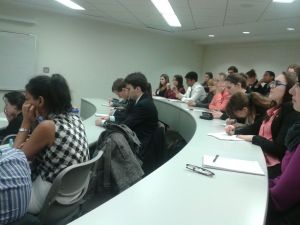