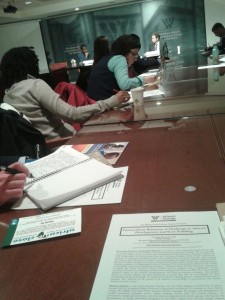 Lots of folks taking notes and listening more intently than I

After watching the Heart of Iron on the Wilson Center’s 6th floor, I walked down one flight of stairs for an event sponsored by the Center’s Africa Programs, ‘Patron – Client Relations: A Challenge to Africa’s Development and State Building.’  Although I was a minor in political science, I’ve been out of school for several years, so I’m not even sure what Patron – Client relations are. Paul Mensah, a Wilson Center Southern Voices scholar and Programs Officer at the Center for Democratic Development (CDD), one of Ghana’s most respected think tanks, was very erudite in his analysis of clientelism and Mike Jobbins of Search for Common Ground served as discussant.

I hope my readers will forgive me for this admission, but I must confess that the complexity of the talk led my mind to wander.  Mensah did speak with fervor and noted some interesting statistics – 30% of Ghana’s legislators are appointed and the 2012 national elections had 83% turnout compared to just over 46% for national elections in 2010.  He also noted the unfortunate phenomenon of political parties in Ghana sponsoring organizations masquerading as concerned civil society groups.

Alas, the event really did not grab me.  It was simply too generic and fond of recycling typical jargon and verbiage to be interesting.  Calls were made for ‘mobilization of civil society’ and ‘accountability mechanisms’.  I’m glad that the Center’s Africa Program, under the leadership of a new director, is providing support to Africa-based scholars and practitioners.  That said, I would have been much more interested in Mensah talking about his experiences at CDD or civic education programs in Ghana.  What I heard didn’t interest me, and I don’t feel like it was particularly new either.

I made a comment to that effect offhand to one of the Program’s staff/interns and was dismissed with a response that DC attracts a lot of bright people with complex ideas.  I guess sometimes I’m just thoroughly outclassed.

Fana Gebresenbet Erda, another Southern Voices scholar at the Program sat near me, looking bored, and left before the end of the event.  His talk is Thursday and a bit more specific (and it has lunch!).