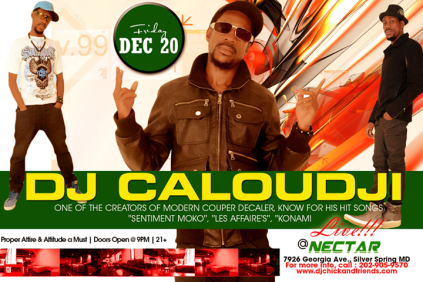 I love west African music, but my tastes are mostly confined to the Anglophone countries (see my posts on Nigerian and Ghanaian shows here in DC).

Accordingly, I’m very excited to expand my horizons this Friday and get a taste of Coupe Decale, the Ivory Coast’s answer to Ghanaian Hiplife and Nigerian Afrobeats.  Nectar Lounge is billing Dj Caloudji as ‘one of the creators of modern couper decaler.’  I have no idea if he’s that instrumental to the genre, but you can listen to his album ‘Sentiment Moko’ for free on Spotify and catch the video for the album’s title track on YouTube.

Nectar Lounge is in Silver Spring on Georgia Avenue, just past the DC line. 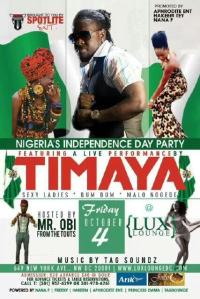 It’s past 4 am and I’m just back from the Timaya show.  First off, an apology if anyone bought a ticket at the link I posted to.  I did and it was not honored.  I don’t know if that’s because the promoter was trying to cheat me or not, but I eventually got in through the good graces of a female promoter. The protestations of the guy were ridiculous, because I was there early enough that they were still letting people in for free off the guest list.  Now on to my thoughts on the show.

END_OF_DOCUMENT_TOKEN_TO_BE_REPLACED

Artisphere, a venue in Arlington with which I am not familiar has two upcoming shows with African performers.  Both are $15 with advance purchase.

1.  On September 28, the Malian Sidi Toure will be performing.

2.  On October 19, a Nigerien band, Tal National (with which I am amazingly not familiar despite spending significant time in the country) will perform alongside Janka Nabay and the Bubu Gang.  Janka is originally from Sierra Leone, the rest of the gang hails from Brooklyn I believe.

* My part 2 post will cover a venue in DC that has shows with west African performers (from two of the same countries I mention here ironically) at the end of this month and early October.  I plan to attend both of these.  Can any readers guess what venue I’m talking about?

Since launching Africa in DC, I do not believe that I have discussed anything to do with African theatre, dance, or oration at all (or at least directly).

At the end of the month (July 29 – August 4 to be precise), the show Africa Umoja will be screened at the Warner Theatre in Downtown DC.

I’m not too clear on the specifics of this performance, but it sounds vaguely like a South African version of Fela!  The Umoja US tour website adds that the show “tells the moving tale of indigenous South African music, its people and their song – from the earliest rhythms to kwaito.”  Their press release also mentions an interesting  tidbit on a delay in visa processing, I won’t add any further commentary on that, though regular readers should know my feelings.

You can read brief bios of the cast members here.  Unlike Fela!, the cast appears to be entirely (South) African.

This is not a topic that particularly pertains to the ‘Africa in DC’ theme, but as we approach a summer weekend, I wanted to share with everyone one of my favorite Afrobeats tracks of the moment – ‘My Way’ by the Nigerian Wande Coal.

A Google search shows that Wande performed a few shows in the DMV in 2010 (just before I moved here) like this one at the University of Maryland.  While he chooses to reference Rihanna in this track over my favorite Nigerian (UK might be a more appropriate description) singer, Lola Rae, he does show some African love by complimenting the figures of ladies in Ghana.