This morning I attended a discussion on ‘Soft Power in Countering Extremism from the Horn of Africa to the Western Sahel.’  The talk (I left before Q&A) was sponsored by George Washington University’s Institute for Public Diplomacy and Global Communication.  It featured two elderly representatives from Albany Associates, a London-based firm that is ‘about trying to communicate in different environments’ and where it ‘sort of helps’ to be an ex-Royal Marine (in the words of its Chair, Sir Robert Fry).  Oddly, as you see above, Albany was also a co-sponsor of the event.

END_OF_DOCUMENT_TOKEN_TO_BE_REPLACED 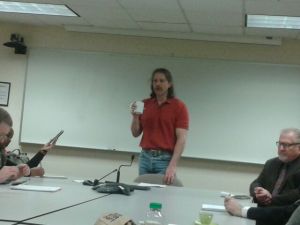 Yesterday I heard William Reno, Professor of Political Science and Director of the African Studies Program at Northwestern (the country’s oldest) speak on ‘Rethinking State-Building in Muslim-Majority States: Grounded View From Somalia.’  I was vaguely familiar with Reno from his work on Sierra Leone in the 90’s which I briefly encountered as a student about a decade later.  He remains focused on security issues on the continent and appears to have shifted his focus from resource conflicts in west Africa to network conflicts in the Horn of Africa.  He got a bit theoretical at times and my mind wandered (I was a bit out of my element despite having attended another recent area event on Somalia security), but my main takeaways were thus:

END_OF_DOCUMENT_TOKEN_TO_BE_REPLACED

From L to R: Watts, Hansen, the Moderator, and Bruton

Continuing my focus on African security issues this week, I ducked in for the better half of a Carnegie Endowment for International Peace event yesterday on ‘The al-Shabab Threat After Westgate.’  The depth of the analysis was light-years beyond what I heard at the Brookings Institution on Monday (many names that resonated with me only vaguely, if at all, were thrown about).  Two of the speakers indicated that al-Shabab was a spent force, the lone dissenter (and the only non-American on the panel) opined that while al-Shabab is in decline, ‘they still have a potential to be a major threat.’ END_OF_DOCUMENT_TOKEN_TO_BE_REPLACED 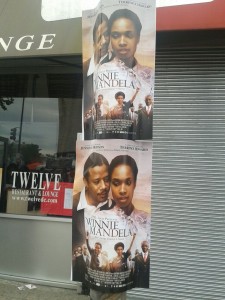 Yesterday I threw on my Liberian lone star state flag t-shirt and channeled my inner hipster as I hit up the H Street Festival. I was pretty shocked by the size of the event and the large crowds, but they rapidly thinned out as rain struck about halfway through the event.

While the main African event in the DMV that day was slated to take place in Silver Spring, I did catch some Afro touches on H Street.  Someone had been promoting the new Winnie Mandela film featuring Terence Howard and Jennifer Hudson as I saw a few posters around.  I passed at least one stage where ‘African dance’ was being performed.  I also noted that just the day before, the Atlas Performing Arts Center had a performance by a Malian (they seem to entertain here in endless numbers), Baseekou Kouyate.  I met a few former Peace Corps volunteers who had served in Africa and saw someone with an extremely cool Kenyan cricket/rugby jersey.  Finally, while waiting in line at an ATM, several girls in front of me were having an extended conversation on the recent attacks by al-Shabab at the Westgate mall in Kenya, which I had visited.