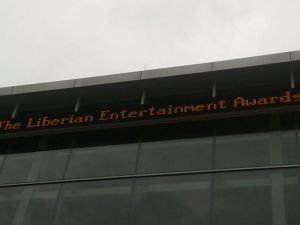 On a walk to Silver Spring today I passed by the Montgomery Community College which had an announcement for the Liberian Entertainment Awards this Saturday scrolling outside its performing arts center for all passersby on Georgia Avenue to see.

A few minutes later I passed by the AFI Theatre where TransAfrica Forum’s 10th annual New African Films festival will screen in a few weeks.  Half of a Yellow Sun, the film adaptation of a book by Chimamanda Ngozi Adichie (who has me thoroughly mesmerized after I saw her at Politics & Prose in May) will be screening as part of it and AFI also has a film introspective by Raoul Peck coming soon.  Peck has made a film on Lumumba, and as I recall, he is a Haitian who grew up in the Democratic Republic of the Congo. 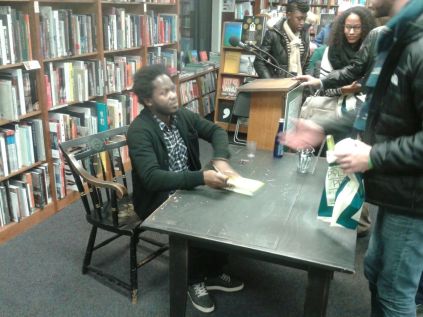 I’ve heard prominent authors such as Paul Theroux, Taiye Selasi, and Chimamanda Ngozi Adichie speak at Politics and Prose since launching this blog.  The independent bookseller continues to impress me with the number of African or Afrocentric writers it hosts.  This Friday, Ishmael Beah, a former Sierra Leonean child soldier, who shot to prominence with his autobiography Long Way Gone, spoke at P&P to promote his just released novel, Radiance of Tomorrow.

END_OF_DOCUMENT_TOKEN_TO_BE_REPLACED

Politics & Prose continued its foray into Africanist literature (I recently reviewed an event there with the African travel writer Paul Theroux) this evening.  The Nigerian raised and American educated Chimamanda Ngozi Adichie read a selection from her new novel, Americanah and managed to give some pretty interesting responses to questions disguised as fawning statements or personal political polemics.

Adichie opened the evening by speaking of END_OF_DOCUMENT_TOKEN_TO_BE_REPLACED