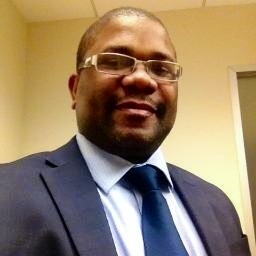 I recently had the pleasure to hear National Endowment for Democracy (NED) Reagan-Fascell Fellow Charles Mangongera, Director of Policy and Research for Zimbabwe’s main opposition party, speak masterfully at NED on the role of the military in the country’s political sphere.  Dedicated readers may know that I have a particular interest in Zimbabwe and recall an earlier Africa in DC interview of another Zimbabwean activist. END_OF_DOCUMENT_TOKEN_TO_BE_REPLACED 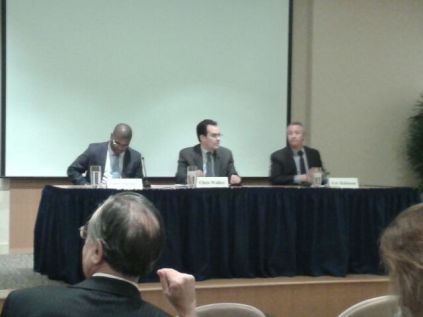 Mangongera at left of NED Moderator and Commenter

Yesterday, I attended a talk by Charles Mangongera, a Reagan-Fascell Democracy Fellow at the National Endowment for Democracy.  Mangongera is the Director of Policy and Research for the Movement for Democratic Change (Tsvangirai branch), the main opposition party in Zimbabwe.  Before assuming this position, Mangongera worked with Freedom House and was authoring reports for DC-based organizations like USAID and IRI.  Mangongera masterfully covered  wide-ranging remarks on ‘Zimbabwe’s Military and the Prospects for Democratic Reform.’

END_OF_DOCUMENT_TOKEN_TO_BE_REPLACED 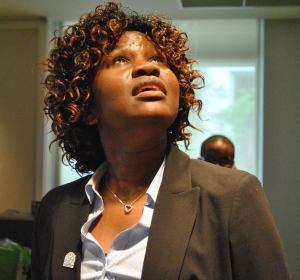 On Monday I sat down with Cleopatra Ndlovu, an Atlas Corps Fellow from Zimbabwe to discuss Zimbabwe’s recent elections, gender, NGO management, and a host of other issues (such as our mutual dislike of the late Sungura musician Tongai Moyo).  Cleopatra is currently serving with InsideNGO (‘a good and eye opening experience’), an organization which offers capacity-building services for NGOs.  She has been in DC for slightly over half a year and will remain here for the remainder of the year.  It is not her first visit; she was one of the young African leaders who participated in a town hall meeting with President Obama in August 2010. END_OF_DOCUMENT_TOKEN_TO_BE_REPLACED

I expect to have several posts up shortly speaking on developments in Zimbabwe.  One will be a conversation with a Zimbabwean gender rights activist currently based in DC and I plan to depart from my typical Africa in DC lens to examine the election results in a rural constituency that I have visited several times and which has traditionally been a bastion of support for Robert Mugabe’s ZANU-PF.

In the meanwhile, please read my analysis of a piece on Zimbabwean political developments in the early 1980s, I think it offers some important context for events today.

I’ll leave you with one personal observation.  I was very distressed by recent comments I heard from Shannon Smith, a high ranking official in the Bureau of African Affairs on American willingness to engage with Mugabe and ZANU – PF.  Consequently, I have been pleasantly surprised by the relatively strong comments from the State Department on the election (‘the culmination of a deeply flawed process’), which goes far beyond the appeasing comments uttered by Smith, who sounded like she was trying to win a stake in a Zimbabwean diamond mine.

Until the State Department statement, it seemed as if Mugabe was on the cusp of pulling a Myanmar-esque renaissance, perhaps if he hadn’t been so greedy as to decimate the MDC presence in parliament, the election may have been more ‘credible’.  It begs the question however – where was the USG in the midst of this deeply flawed process? 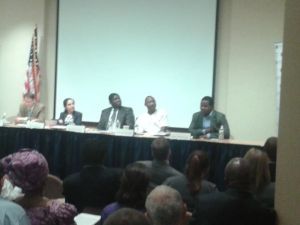 *I will publish part 2 tomorrow on the comments of Shannon Smith, the Deputy Assistant Secretary of State for African Affairs.  I took great exception to her diplomatic speak, so please indulge my venting in a dedicated post.

Alas, work commitments today meant that I missed most of the ‘Beyond the Elections in Zimbabwe‘ conference convened at the National Endowment for Democracy and co-sponsored by a variety of local organizations.

I arrived late, in the middle of the 2nd panel, and had to leave early (fortunately, I still got a delicious lunch).  This meant that I missed the first panel, on civil society, which was what I most wanted to hear.  Fortunately, END_OF_DOCUMENT_TOKEN_TO_BE_REPLACED

Zimbabwe’s July 31st election and the political transition following the March coup in the Central African Republic are two issues that have been conspicuously absent from debate in DC Africanist circles.  My thoughts on both:

Zimbabwe: The lack of discussion surrounding the elections in Zimbabwe is particularly puzzling.  It is an Anglophone country, it borders South Africa, where the US has immense interests, and it is a place where many figures of import in DC likely have personal exposure to – they may have visited on safari, perhaps they went to school with someone from the country, or maybe they just get worked up by the antics of Robert Mugabe.

There have been a few local events, such as this one I went to at Freedom House, as well as a Congressional hearing, but this pales in comparison to the attention that Kenya received in the months before its elections.  I can only suppose that ‘Zimbabwe fatigue’ has settled in.  In any event, this lack of coverage bodes ill for Zimbabwe’s future – those inclined to abuse power will probably feel emboldened to do so.  Obama briefly spoke on the need for reforms in Zimbabwe during his recent visit to South Africa, but even his criticism did not generate much discussion.

Central African Republic:  The lack of interest here is not unsurprising.  The country is Francophone, landlocked, and has been mismanaged throughout its history, so despite its mineral wealth, the coup probably did not impact the prevailing status quo in regards to Western interests.  Most tellingly, I have not even been to a CAR event to which I can provide a link to a post on Africa in DC (though I did hear of a protest in front of the White House).

However, there are other angles that makes the extent of Washington’s hands off approach somewhat unexpected.  Following the incredible success of Invisible Children’s Kony 2012 documentary, the AU dedicated forces to tracking down Kony and they are being supported by a small contingent of US forces in Central Africa (I believe the Americans are based in Uganda, though Kony is widely suspected of being in CAR).  Unrest in CAR is undoubtedly good for the Lord’s Resistance Army – why then are civil society groups not agitating for greater US engagement in the country?  Perhaps this is because active DC organizations focusing on Central Africa, such as the Enough Project and the Great Lakes Policy Forum, do not include CAR in their analysis.

Over a dozen South Africans lost their lives defending the previous CAR administration, a development that may also have significant repercussions.  Finally, the transfer or power through military means is increasingly decried across the continent as it clashes with the Africa Rising narrative, I am surprised that there have not been louder murmurs regarding the need for a prompt democratic transition.

Again, I suspect the silence here bodes ill for the CAR’s future.