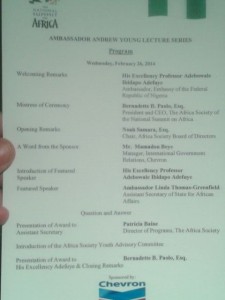 Yesterday, the Africa Society hosted Linda Thomas-Greenfield, the Assistant Secretary of State for African Affairs, at the Embassy of Nigeria.  The event was originally slated for December, but postponed when the Secretary traveled to the Central African Republic to deal with the crisis there. Although I was fatigued from a new job and illness I ventured out in the evening after work to hear if there would be any interesting observations given the recent suspension of Nigeria’s highly suspected Central Bank Governor Lamido Sanusi, state criminalization of homosexuality in Nigeria, and the appearance of increasing autocracy from Nigerian President Goodluck Jonathan.

END_OF_DOCUMENT_TOKEN_TO_BE_REPLACED

A recent appeal on the online blogging forum African Arguments (a site I greatly enjoy) from the former US Assistant Secretary of State for African Affairs, Hank Cohen, for UN trusteeship of South Sudan has really set me off.  The piece epitomizes the narrative of Africa as a dangerous locale for exciting adventures in which the white man can nobly shoulder the weight of his burden, rather than illustrating the more hopeful economic narratives of Africa that are becoming more predominant in many corners (although those could also have the potential to set me off). END_OF_DOCUMENT_TOKEN_TO_BE_REPLACED

Having set things up on Monday as ‘security week‘ for the blog, it seems that some sort of reference to the emerging situation in South Sudan is necessary.  To that end, I will outsource all coverage to local analyst Lesley Anne Warner, who has had several interesting posts on the emerging conflict in Juba in the past couple of days.  Her Twitter suggestions for further info may be particularly useful.

Lesley is DC-based, has experience in South Sudan and blogs at Lesley on Africa.

On June 18, the blind Malian duo, Amadou & Mariam (the link contains a very detailed bio) will be performing at the 9:30 Club.  They will be joined by Bombino, a Tuareg guitarist from next door in Niger who is starting to make a big name for himself (I believe he performed at the Black Cat last summer, and come to think of it, I believe Amadou & Mariam may have performed at the 9:30 Club a year ago as well).  According to 9:30’s bio of Bombino, two of his bandmates were killed during Niger’s Tuareg rebellion that ended in 2009.

If you can’t afford the $40 ticket for that show, the Millenium Stage at the Kennedy Center has 2 free shows with African performers for you.  On June 20, Cheick Hamala Diabate, another Malian (although he must be based in DC, because he’s been doing a lot of shows here in recent months), will perform to support UNHCR in honor of World Refugee Day.  Two days later, the South Sudanese rapper Emmanual Jal will perform at the same venue.  I have to confess I had never heard of Jal, although the Kennedy Center blurb says he is ‘world-renowned’ and his Wikipedia page is quite lengthy (he was a child soldier, who managed, in something that sounds like it was taken from the pages of Philip Caputo’s Acts of Faith, to escape to Kenya, with the help of a British aid worker married to a South Sudanese commander, which is where he was able to launch his music career).

If you go to any of these, let me know how it was.