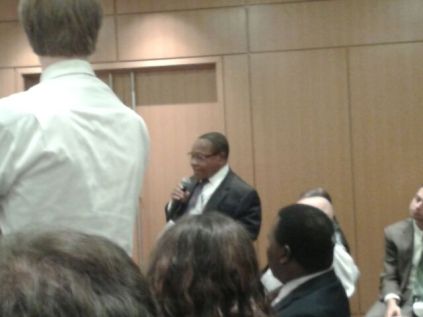 Today, I attended a superb talk by visiting NED Fellow (and Zimbabwe opposition staffer) Charles Mangongera on Zimbabwe’s military.  His superb presentation warrants a post (to come soon) that focuses solely on its own merits.  For this space here however, there was a very interesting exchange at the end of Q & A with an official from the Embassy of Zimbabwe that warrants a separate examination.

The event program indicates that two representatives from the embassy attended the event, Whatmore Goora, a political counselor, and George Chinoingira, the Defense Attache.  I presume the gentleman above is one of the two.*  He was one of the last questioners selected to speak, but he certainly made sure that the event concluded on an energetic note.

The Embassy official began his critical query/remarks by noting that he didn’t ‘recall the MDC-T [Movement for Democratic Change, the main opposition party] attributing its failure to win the elections…to the military.’  He continued by noting that the MDC was in a power sharing arrangement with the ruling ZANU-PF party from 2009 – 2013 and asked ‘why were they incapable of negotiating…things that they felt needed to be addressed in a period of 5 to 6 years?’

He went on to comment on the numerous fora he has attended in Washington DC where political and civil society activists have criticized ZANU – PF.  He even noted that he had heard such individuals speak in the very same room, return to Zimbabwe, and not experience any ‘retributions.’  He added that while there may have been isolated incidents where political activists have been targeted by the security forces, the government of Zimbabwe does not ‘condone the death or ill-treatment of a single Zimbabwean citizen.’

I found this comment to be very interesting as I attended an event on the eve of Zimbabwe’s July 2013 elections in the very same room.  Among the invited speakers were civil society representatives such as Jenni Williams (Women of Zimbabwe Arise), Japhet Moyo (Zimbabwe Congress of Trade Unions), and Foster Dongozi (Zimbabwe Union of Journalists) who have all been arrested for supporting reform in Zimbabwe.

I could not help but think that in making this comment, the Embassy Official  intended to intimidate Mangongera.  I have visited Zimbabwe several times; I only experienced one minor personal incident in 2005 that fits with the anti-western narrative, but the threat of violence was certainly one that resonated vividly with all Zimbabweans.  Even in my limited circles, I recall speaking with individuals who personally knew people killed in the 2008 electoral violence.  ZANU-PF also has a documented history of beating and arresting prominent opposition officials to prevent them from traveling abroad.

The Embassy official concluded with remarks alluding to the double standards of the West, which are hard to argue with, but do not in themselves justify the terrible atrocities committed by the Zimbabwean state over the past quarter century.  The Embassy official mentioned wars instigated by western powers that have devastated countries – I suspect he Iraq in mind.  He also noted that ‘right now there are military governments conducting elections in certain parts of Africa, perhaps they have ingratiated themselves with certain powers.’  I suspect this was a reference to Egypt, although US allies like Burkina Faso, Uganda, and Ethiopia could fall under this umbrella as well.

Mangongera coolly responded to these remarks, noting that the MDC was not able to push for reforms as ‘there was no full implementation of the GPA [Global Political Agreement, which facilitated the power sharing arrangement between ZANU-PF and the MDC].  In regards to the MDC’s failure in the elections, Mangongera noted that no political parties were ready for elections and cleverly cited the fact that Mugabe set the 2013 election date in response to a court ruling resulting from a case initiated by a concerned ‘private’ citizen.

But perhaps I misinterpreted this whole exchange as I saw the Embassy official approach Mangongera after the event with a smile on his face, ready to exchange a few remarks in Shona that I can only imagine were more cordial.