After shelling out close to $50 this weekend to see P-Square, I wasn’t particularly enthused to also spend that amount to attend the African Oscars today (and I know little of Nollywood).  There were also several movies being shown in association with the award yesterday, I might have gone to one, but I was thinking that P-Square would start early enough to conflict with those screenings.

However, I did hear of a Nollywood Summit that NAFCA was convening at a Holiday Inn in Georgetown.  The event kept with my theme of waiting for the day.  It was billed to start at 5, began near 6, and people kept trickling in until right up to the 7pm close (the event began with only about 15 people in attendance and ended with at least twice that number).  I was definitely out of my element.

Most of those attending seemed to be Nigerian (or Ghanaian) American film directors and producers.  Most seemed to be relatively young, in their 30s.  They discussed industry issues like distribution, bootlegging, and the importance of film festivals.  One Chicago based filmmaker had eve been in discussion with the Corporate Council of Africa about producing films.  Facilitating the discussion was a Dr. Clarice Ford-Kulah, who is based in Atlanta.  I don’t know much about her at all, but she has apparently just completed a film called ‘When One Door Closes’ with the Nollywood star Van Vicker.

The NAFCA award show is tonight.  The official after party is at the same Holiday Inn at Georgetown and apparently Nectar Lounge has an ‘unofficial’ after party.

A film being screened at the Holiday Inn last night 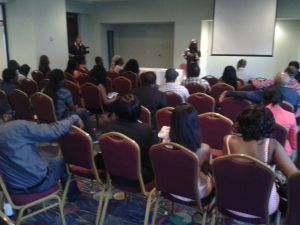