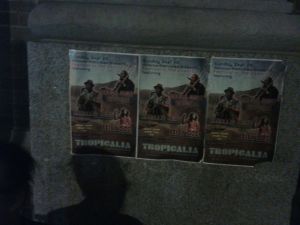 Last night I attended Tropicalia’s ‘Festival in the Desert’ with the Mauritanian Diva, Noura Mint Seymali, Mamadou Kelly, an ethnic Bambara from the Timbuktu Region of Mali, and Leila Gobi, from Menaka, in the Gao Region of Mali, an area which saw a lot of fighting between Tuareg separatists and Islamist militants.

Seymali opened, playing some very cool tall, thin stringed instrument with multiple sharp protusions.  Her voice was great, and her three member band had a hard hitting, modern sound, that I was not expecting from a Mauritanian performer.  Her two guitarists were from Mauritania while the drummer appeared to be American.  There was a significant number of Mauritanian women in attendance and they serenaded her with dollar bills.

It’s hard to describe her marvelous performance (her set was about 40 minutes), so you may want to check out a clip of her on YouTube from the 2012 Festival in the Desert.

Mamadou Kelly followed with a very energetic set that lasted about an hour.  He also had a three member band with very unusual instruments.  His older brother was able to do some awesome drumming on some sort of gourd and another guy played some miniature banjo type thing that looked to be made out of a smaller gourd.  His songs were primarily in Bambara, but he explained each one in French before launching into the tune.  He opened his set by proclaiming Malian/Mauritanian unity and speaking of the recent improvements in Mali’s political and security situation.

Leila Gobi completed the show.  Her band was great and arguably rocked out the hardest of the three performers.  They maintained a Sahel flavor, but were probably the closest in sound to American Rock and Roll of any of the performers. Unfortunately, I found her nasal wailing to be insufferable and left just a few songs into her set.

Gobi’s voice aside, the show was excellent.  I was very disappointed by the small turnout.  I realize the show was on a Sunday, but it started at basically the same time as Sunday Night Football.  Given the attention the situation in Mali received earlier this year and the number of people I saw attend the screening of The Last Song Before the War, I would have expected a much larger crowd.  Those that showed up were quite a diverse lot, although predominantly white. 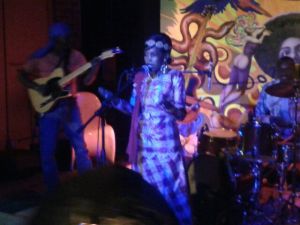