I’ve spent some time in two African countries profoundly shaped by foreign settlers.  Zimbabwe was populated by Europeans in the 20th century while Liberia was the destination of black Americans primarily in the 19th century (supported by the ACS, based in Washington DC and various state colonization societies as well).  While tributes to White Zimbabweans are somewhat rare in present day Harare, the Americo – Liberian influence in Monrovia remains more prominent.

Find inside pictures of a statue of Liberia’s first president, JJ Roberts (sandwiched between the ruins of the Ducor Palace Hotel and the ruin by appearance, but very much functioning Masonic Lodge) and of Liberia’s longest serving President, WVS Tubman on the grounds of the University of Liberia.  And finally, a monument of the two of them together. 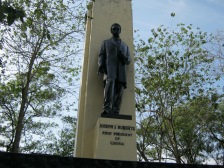 Above are pictures (from various angles) of a monument to JJ Roberts. 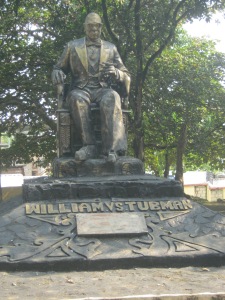 A much less fancy statue of William Tubman on the camps of the University of Liberia (he was not a graduate). 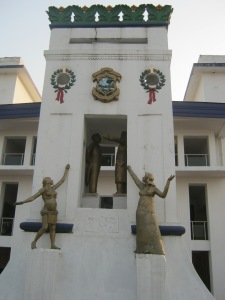